As cliched as it sound, I dreamed about living in France ever since my first visit to Paris in my childhood. Since then I travelled regularly to Europe and Paris was always part of the itinerary. Unlike many childhood memories revisited, Paris didn’t disappoint. But part of me just wondered… how would it be like to be living in the less touristy part of France. I mean to actually become part of the neighbourhood… to know all the best local boulangeries… to have the lady at boulangerie prepared my favorite baguette pas trop cuite without asking… to commute home by walking all those secret shortcuts and to greet neighbours with a “Bonjour”…. While quitting my job and living in France is a dream both abstract and impractical, at least in the near future, I instead signed up for an one-week immersion program. This time ditching the usual tourist trail and hit the French countryside.

It had been a dream come true to immerse myself in the language that I have come to passionately love, which sounds echo in my ears like musical notes. During the one week time I spent at l’Ecole des Trois Ponts (meaning three bridges school) on the outskirts of Roanne, I had three hours of instruction every morning on grammar followed by pastry class in the afternoon, and mealtime where only French is spoken. In the pretty campus, which is a recently renovated 18th-century chateau, I did not have to worry about anything but learning French. My room was cleaned by a maid everyday, a talented chef prepared lunches and dinners for us and good local wines, cheese always accompanied them. I had the opportunity to sample 25 cheeses in a week. They were so irresistible that I gave up any thought of dieting and tried every single one.

The afternoon pastry class was equally engaging… I learnt French classics such as croissant, fruit tarts and macrons. Unlike cooking, where you can follow your own taste. Patisserie is a science, weighing your ingredients and careful calculation are in most cases absolutely essential.  I was in awe of a country that has developed bread and pastries so divine out of nothing but flour, sugar and butter. 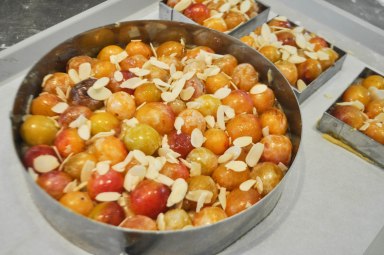 I still remember the day I had my croissant class. Shattering the shell to reveal supple number of layers, there is no croissant as crispy and fluffy or as buttery as the one you eat, still warm from the oven.
And I went to bed that night with a big, fat satisfying grin on my face and my fingers smelling like butter =)